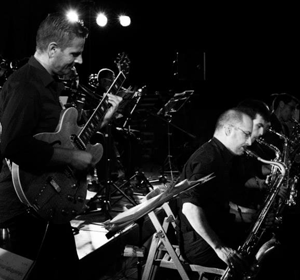 The OffCourse Big Band has developed its repertoire from Funky and Latin songs, with a particular interest in the compositions of the American saxophonist Bob Mintzer.

At a later stage we have added songs from the “Swing Era”, including classic jazz and vocal repertoire… the selection of songs is influenced by artists like Duke Ellington, Count Basie, Maria Schneider, Sammy Nestico, Kenny Wheeler. Our musical repertoire also includes songs and arrangements for big bands composed by  Simone La Maida.

The OffCourse jazz band has also undertaken the challenge to play what Duke Ellington himself has described as his most representative work: The Sacred Concert. On this occasion, the Big Band, in collaboration with the Chorale San Marino and the singer Sara Jane Ghiotti, received  great public and critical acclaim.