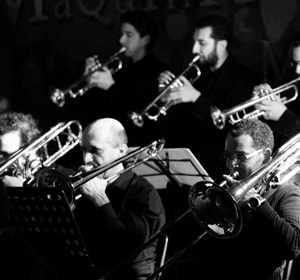 The OffCourse Big Band, as well as performing songs from the jazz, funk, and latin repertorie, is active to stage musical projects.

From the beginning has paid particular attention to the compositions of the american saxophonist Bob Mintzer, devoting much of his repertoire to his songs.

In 2013, together with the Choral San Marino and the singer Sara Jane Ghiotti, presented to the public the Sacred Concerts of Duke Ellington.

In the same year, OffCourse has collaborated with the singer Valentina Monetta participating in the incision of Hotel, song included in the album Sensibilità (Sensibility) published in April of the following year.